INTRODUCTION
The day I survived three heart attacks started off quite normally.

I ​didn't wake up that morning soaked in a forewarning sweat. No
psychic or evangelical street preacher stopped me that day to warn me of an upcoming catastrophe and recommend I ​head back home to spend the next twenty-four hours under the covers. I didn't have a sentimental instinct to give my mother an appreciative kiss on the cheek, or write a will doling out my meager possessions.

When I heard what happened...I jumped on a plane, slept at the hospital
and a friends house..........Steven B, Glenwood Springs CO

Everyone was crying; It was horrible...We all prayed like we never prayed before.........Carla M, Franklin Square, NY

Was he already dead and they just weren't telling me?  Was he in pain?
Was he going to be crippled?........Michael H, Rockland County, NY

Articles/Blogs about the book-

​​Yoganonymous.com - The Miracle of Bikram Yoga

I was trapped in bed for over three months and in a coma for the first three weeks. I spent a total of seven months in three different hospitals trying to recover....Click here to read entire article.

​Imagine waking up from a coma in a hospital bed and realizing that your connected to three life support machines, unable to eat or speak and the entire left side of your body is paralyzed...Click here to read entire article.

It was Dec. 5, 1988, a cold, blustery night in Howard Beach, and 23-year-old Joseph Parenti was driving along 162nd Avenue on his way home. Meanwhile, a man had stolen a car on Cross Bay Boulevard and was hurtling down 91st Street at breakneck speed...Click here to see entire article.

​It was winter 1988, and Joe Parenti was 23, driving home after filling up his gas tank, when he was blindsided by a stolen car going 80 mph at 162nd Avenue and 91st Street. He went into cardiac arrest and nearly died at the scene...Click here to see entire article.

LI Herald - The horrific car accident that changed everything

Confined to a hospital bed, connected to three life-support machines and unable to eat, talk or walk after a horrible car accident...Click here to see entire article.

Mobile users-scroll to bottom to - View on Desktop. 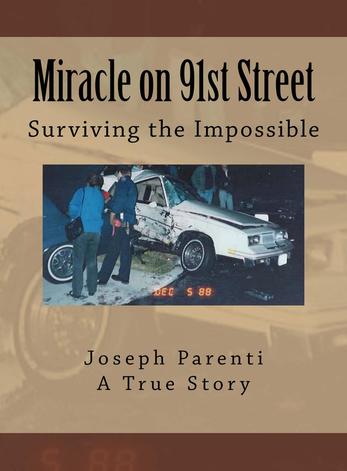 This book would not have been possible if not for The West Hamilton Beach Volunteer Fire Department. Without their quick response and expert care, I would not be alive today.To show my gratitude, a portion of my profits from the sale of this book will be donated to them.